Mike Teavee is one of the characters in Charlie and the Chocolate Factory. He serves as one of the four main antagonists and the fourth and last child to be eliminated. He is from the US.

Mike is one of the five winners the golden tickets. He is from the city of Denver, Colorado and his time outside of school is spent on watching television and playing violent video games.

Willy Wonka explains that he will utilize the machine to send chocolate to the public via their television sets, a phenomenon that Willy Wonka refers to as 'Television Chocolate'.

Mike scoffs at such a claim, branding it as absurd and proceeding to tell Willy Wonka that he understands nothing of science. After a demonstration proves that the invention is indeed a success, Mike begins to stare at the machine's potential possibility as a teleporter capable of transporting entire people to different locations and rushes to test his hypothesis first-hand against Willy Wonka's wishes. The end result is Mike being shrunken so small, his voice sounds like a mouse. He suggests being put through in reverse, only to be told that the process is a one-way trip. Willy Wonka suggests Mike be put in the taffy puller to get him back to normal size. He also likes cheese.

However, the Oompa Loompas overstretch Mike and he leaves the factory 10 feet tall and completely thin.

Mike acts like he was smarter than everybody. He initially didn’t believe in Willy Wonka's "Television Chocolate" invention.

Mike is also angry, repeatedly screaming, violently pushing and yelling in the movie. Mike’s behavior are implied to be the result of bad parenting. His parents did not seem to raise him properly so he was without any childhood. He was forced to grow up quickly, and that resulted in him seeming cold and unemotional.

The only feelings he shows are anger, aggressiveness and hatred. He is shown to be smart, however. He managed to break the code and system in order to work out where the golden ticket was. He specifically explains that he only needed to buy one candy bar.

Mike is also depicted as correcting people, presumably to show off. He wants to be in the spotlight. This shows his selfish and stubborn side.

Before the stretching, Mike was normally wiry with short brown hair and fair skin with rosy cheeks. Unlike the other four children, his eyes are turquoise or green.

When he was being interviewed, he wore a grey bleeding skull shirt under a long-sleeved black shirt, dark gray lounge pants, and black Converse sneakers.

The day he went to the factory, he briefly wore a black and red jacket. Underneath the jacket was a black skull shirt over a long-sleeved red shirt, very dark cornflower blue jeans, and black Converse sneakers.

While stretching, he shows a bit of his stomach.

Mike's song is a tribute to punk rock. The song talks about how Mike watches television too much and how it could affect your brain. It also talks about how just because he watches a lot of TVs, doesn't mean he knows everything and how the television is not always right.

Willy Wonka - He thinks that Willy Wonka is an idiot because of the new invention Willy Wonka made. Willy pretends to think Mike is mumbling (when in reality, he couldn’t care less what a smart-aleck know-it-all kid like him has to say). He also comes off as a hypocrite saying all Wonka thinks about is chocolate and "Candy is a waste of time" when all he himself does is play video games and watch TV. 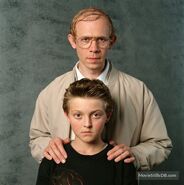 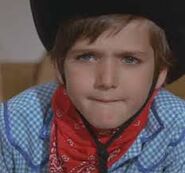