Charlie and the Chocolate Factory Wiki
Register
Don't have an account?
Sign In
Advertisement
in: Parents, Adults, Themes,
and 6 more

Scarlett is a very attractive and curvaceous woman. She is nearly identical to Violet, having the same features and always wearing the same clothes as her daughter, but taller, and more physically mature. In all her appearances, she wears a tight tracksuit.

Scarlett is extremely competitive, shown with her victories with batons. It is heavily implied that all of Violet's traits were inherited from her, and they even dress in similar clothes too. Because her husband is not present in the picture, she was a single mother raising her daughter, fueling her competitive and proud personality, and treating her with a coach-and-athlete/teacher-and-student relationship rather than a motherly one. She is shown to be extremely neurotic as she attempts to flirt with Wonka to ensure her daughter's victory. Scarlett also appears to be rather cowardly as when Violet begins to turn blue she backs away from her daughter along with the others rather than attempting to help her daughter. Scarlett also shows a callous if not slightly insane streak as when Violet has become a blueberry her first concern is how her daughter will be able to compete and she even considers placing Violet in a county fair at Veruca's suggestion.

Scarlett does however show some hint of parental instinct when Violet is stuck in the inventing room doors as she runs to help her daughter and push her along. When last seen Scarlett is leaving the factory with a now blue violet who is highly excited about her new flexibility. Scarlett, however, is less impressed. She coldly tells her daughter that she is still blue despite her flexibility, implying that she will give up coaching her daughter and act more like a mother in the future.

Scarlett is first scene in the Beauregarde's large trophy room in their Atlanta, Georgia residence showing off Violet winning the golden ticket she quickly establishes her stage mother persona by flaunting Violet's 263 trophy's and medals while also trying to display her own baton trophy. It is in this scene that Scarlett is established as a stage mother from Hell. She not only has a strange neurotic looking gloat but also has Violet dressed the same as her right down to matching bob haircuts.

Arriving at the factory

On the day of the tour Scarlett and Violet are stood in between the Gloops and the Teavees. Scarlett further shows of her strange stage mom tendencies with the disgusted look she gives to the other children and when she tells Violet to keep her eyes on the prize. When she sees the welcome performance and its subsequent destruction, she looks at it confusingly. After entering the factory and seeing Violet try to get into Wonka's good graces Scarlett misreads Wonka's reaction and gives Violet and encouraging nod and another neurotic smirk.

The Inventing room and Violet's transformation

After the boat ride and arriving in the inventing room Wonka presents the group with his latest invention the everlasting gobstopper which Violet compares to gum only for Wonka to shoot her down leading to Scarlett giving her daughter a disapproving look. After seeing the creation of the three course dinner gum Violet decides to sample it against Wonka's advice which leads to a seriously smug look from Scarlett, who believes that this will increase her daughter's chances at winning the grand prize, however despite Scarlett's encouragement, things quickly get out of hand when Violet's nose begins to turn purple leading to Scarlett turning to Wonka who quickly ducks out of sight. Scarlett then shows an immensely cowardly side to herself as rather than trying to help her daughter she simply backs off with the rest of the group leaving Violet to transform into huge blueberry. It is at this point that Scarlett Beauregarde shows a truly callous side to her nature with the line "But I can't have a blueberry as a daughter. How is she supposed to compete?" Showing that rather than actually caring about her daughte's well-being Scarlett only really cared about how she could live vicariously through Violet, Scarlett even considers placing Violet in a country fair at Veruca's suggestion.

Scarlett is last seen leaving the factory with the now blue and more flexible Violet and judging from her expressions she is not only disappointed at having lost the grand prize but is also disappointed for having not kept Violet as a blueberry as while her daughter is more flexible she is still blue.

Scarlett and Violet in their house.

Scarlett showing off her baton trophy. 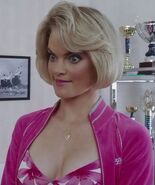 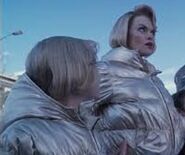 Scarlett and Violet outside the factory.

Scarlett staring in horror at her daughter's predicament.