Charlie and the Chocolate Factory Wiki
Register
Don't have an account?
Sign In
Advertisement
in: Eliminated From The Tour, Storyline, Characters,
and 5 more

Getting what she wants

Not getting she wants

Veruca Salt is an English girl that wants everything she sees and nothing stops her from asking for things she wants. She is portrayed by Swedish-born actress Julia Winter. She lives from in Buckinghamshire County, England.

Veruca is a beautiful young preteen girl with a dark hair color (has a similar hairstyle in the 1971 movie version), icy light blue eyes, and pale skin.

When receipting the GT, she wears a long-sleeved navy blue blazer over a white collared, button-up flannel top with a maroon necktie attached to the collar, beige tights, white ankle-length socks, and black patent leather casual shoes with black soles.

In another scene, she wears a white collared blouse with short puffed sleeves, a maroon ribbon attached to the collar, a knee-high plaid jumper dress in cherry red, maroon, and festive red stripes with a maroon skirt, white tights and black patent leather dress shoes with black soles.

Veruca is a girl begging her mother and father for everything - even if she doesn't have to work for it - and having a fit when she doesn't get it. For example, because of her desire for a golden ticket, her father Rupert Salt forces all of his workers to unwrap an wicked amount of chocolate, with Veruca throwing a strop when the search takes too long. When one of the workers found the ticket, Mr. Salt took it away from her and gave it to Veruca, who, instead of saying thank you, immediately asks for a pony.

Her behavior is showcased all throughout the tour; her desire to win the factory helps create a rivalry between Violet Beauregarde, and she repeatedly asks her father to buy something from Wonka's factory, including an Oompa-Loompa (in a deleted scene) and squirrel workers. This leads to her eventual downfall, as Wonka's refusal to sell her a squirrel caused her to bypass the gate and attempt to take one, leading her to be sent down the garbage chute.

Probably as a result of her nature, Veruca is also shown to have many other traits. She is shown to be cynical to others, which is showcased when she joyfully watches Violet swell up into a blueberry, as well as proud and bragging, showcased when Veruca asks Wonka whether Violet would be a blueberry forever, implying that she sees Violet's condition as her trophy.

In the factory, Veruca wants a squirrel and asks her father for one. When Wonka explains that they are not for sale, Veruca becomes angry and tells her father that she wants one. She then proceeds to go under the gate that guards the squirrel's workplace and tries to steal a squirrel from the nut room. At first, all of the squirrels look at her in bewilderment, however, when Veruca reaches for one, all of them start to leap at her and attack her, as well as clawing and holding her down. As she screams for her father, Mr. Salt becomes fearful when Wonka tells him that the garbage chute in the middle of the room leads to an incinerator, and Mr. Salt panics as Wonka tries to find the correct key for the gate.

At the end of the tour, Veruca is the third to leave the factory, with both her and her father being covered in garbage. The two were spared from being burned by the incinerator as Wonka had informed the last two families in the group that the incinerator was broken. When Veruca sees the Great Glass Elevator, she demands her father to buy one for her, in which her father, having learned a valuable parenting lesson from the Oompa Loompas, responds that she was getting nothing but a bath. Not only did he stopped giving her anything she wants; Rupert Salt realized that him and his wife had been constantly spoiling their daughter. Veruca then pouts, with her father giving her an angry glare.

Veruca's song is a 1970's Hippie song (with the sitar in the background) It is sung right after she falls down the garbage chute.

Veruca Salt, the little brute, has just gone down the garbage chute,

And she will meet, as she descends...

A fish head, for example caught this morning from a halibut.

An oyster from an oyster stew.

A steak that no one else would chew.

And lots of other things as well, each with it's rather horrid smell!

These are Veruca's new found friends, that she will meet as she descends

These are Veruca's new found friends!

Who went and spoiled her, who indeed?

Who pandered to her every need?

Who turned her into such a brat?

Who are the culprits, who did that?

The guilty ones, now this is sad 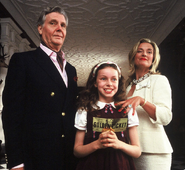 Veruca looking for a squirrel. 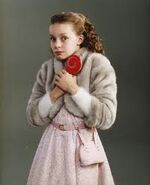 Veruca licking a swirlypop in the chocoate room