Charlie and the Chocolate Factory is a 2005 video game which was released on the Xbox, PlayStation 2, Nintendo GameCube, Game Boy Advance, and Windows platforms. It is based on the film of the same name by Tim Burton. The game was released in the middle of the year to coincide with the release of the film in theatres.

Most of the main cast from the film provided their voices for the game except for Johnny Depp, and James Arnold Taylor was used in his place as the voice of Willy Wonka.

Original Music for the video game was created by Winifred Phillips and produced by Winnie Waldron. 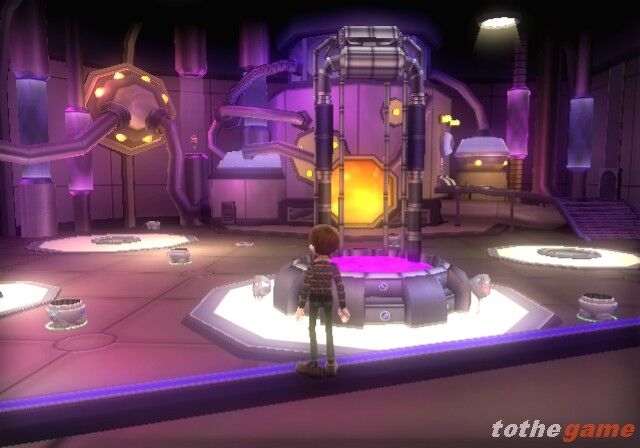 Playing as Charlie Bucket your terms of completing the video game include stopping the rotten kids from destroying the factory, harvesting candy ingredients, using marvellous new candy power-ups exclusive to the game and commanding Oompa Loompas of all varieties.

The Game is split into chapters each with a storybook cinematic broadcasting the task at hand.

Before you intiate the first chapter you must chase a $10 bill that will buy the Wonka Bar with the last Golden Ticket.

Through the snowy city streets across rooftops and behind alleyways you must pursue and learn to use the carrying and jumping system.

Afterwards Charlie will find himself sliding around on a rubbish bin lid chasing after the money, dodging trucks and hazadrous obstacles.

You now begin the first room of the factory; the Chocolate Room.

Augustus is stuck in the pipe and you must follow Wonka's tutorial instructions to complete the first part. This introduces the Oompa Loompa command system of follow, wait, info and work.

The Oompa Loompas will dislodge Augustus with the bellows.

Then you must proceed through the Jelly Beanstalk Room and clog up pipes with vineballs and recieve the first candy ability:

The following room in the candy coating lab is over run with broken machines and wrong coloured candy that only can be set right by the new type of Oompa Loompa: The Welder.

Then you must face off with the out of control Wonka bots re-programmed by Mike Teavee.

You will then recieve you next candy ability: Wriggle Sweets.

The following room is the Chocolate Room ones again where the river has been dried up. You must collect ingredients to fill up boxes around the room, gain the Candy Balloon ability and to fix the waterfall to dislodge Augustus.

Then proceed to Store Room 59 with the Sea Horse Boat.

Now you must roll Violet through several rooms in the Inventing Room  to the Juicing Room.

Then once you are already in the Juicing Room, you must juice blueberry Oompa Loompas to activate doors to the Big Juicer to juice Violet.

Now you must deal with mad squirrels, an overflowing garbage chute, an incinerator destined for Veruca, fixing the machines in the Fizzy Lifting Room and getting the next candy ability: Fizzy Lifting Drink.

Once done, you will progress to the exploding candy room for your last ability: Exploding Candy.

The Television room is over run with Wonka bots and Mike Teavee is trapped inside the television. To free him you must progress through the upper rooms restoring Wonka Vite and using the Oompa Loompas to save the last naughty child.

Chapter 7: Up and Out

The ending or so you think you must travel back to the rooms visited and collect the golden W letters floating around to unlock hidden extras and then restart the Up and Out chapter again to get back to main menu.

Roll quite nicely too

In the video game you will command all kinds of Oompa Loompas in different positions;

From Harvesters to Welders to Blueberries!

Relive the sweet and completely nuts adventure of the movie with four unlucky ticket winners causing trouble inside the factory, the chase for the $10 and the finale with the Great Glass Elevator.

Collect all the Golden W's at the end of the adventure and unlock the following:

Trailers and a Gallery for the Film directed by Tim Burton.

Retrieved from "https://charlieandthechocolatefactoryfilm.fandom.com/wiki/Video_Game?oldid=6675"
Community content is available under CC-BY-SA unless otherwise noted.