Violet Beauregarde is one of the four main antagonists in the film Charlie and the Chocolate Factory. She is played by AnnaSophia Robb.

Violet Beauregarde is the daughter of Scarlett Beauregarde and the winner of the third golden ticket. She’s thin and has pale skin with short straightened blonde hair and blue eyes. She‘s mostly seen wearing a light blue tracksuit, with blue and white trainers and socks and a blue zipper heart and watch.

As a blueberry, Violet is significantly different than how she was, as she’s 10 feet tall and has a spherical-shaped body, being noticeably taller and wider than the rest of the group. All of her body parts, including her head, arms, and legs, were sucked into her body, leaving behind small indents where they should be. Her biggest part of her body is her stomach, which had swelled to the point where it protrudes from her shirt. The rest of her body had seemingly connected with each other, making it impossible to tell them apart. Most notably, Violet is blue, a trait that is kept with her as she left the factory.

Violet's main personality trait is that she is insanely competitive, and her life mantra is win at everything no matter what. This attitude has earned her 263 trophies and medals in a variety of different activates, ranging from Kung Fu to cheer-leading, However, out of all of her achievements the one she’s the most proud off his her status as the Junior World Champion Gum Chewer, a title she earned by chewing the same piece of chewing gum for three months.

Violet's competitive nature to win the final prize was her only real interest for entering the hunt for the golden tickets. In order to accomplish this, Violet temporarily laid of her habit of chewing gum and switched to candy bars which eventually led her to find the third golden ticket just after beating two of her karate instructors unconscious. During her interview, Violet tells the press that the other winners don't matter at all and that she will be the one who will win the secret prize. It‘s also during this interview that the source of Violet's overly competitive nature is shown, as her mother is seen pushing Violet's answers and glorifying her many accomplishments in a very unhealthy way.

Her competitive nature was the cause for her fate. She ignored Wonka's cautions about chewing the gum because she wanted to be the first person to try Wonka's gum. Even after she becomes a blueberry, she calls out to Wonka in an attempt to stay on the tour so she could win the final prize, ignoring the fact that she may be a blueberry forever. After she‘s juiced, she doesn't seem shocked at what had happened to her, instead enjoying her newfound flexibility. Both of this imply that she would sacrifice anything, including her health and well-being, just so she could win.

Violet is also shown to be very aloof and antisocial, which is displayed when she quickly alienates herself from Wonka by telling him in no uncertain terms that she will be the winner of the special prize at the end, as well as steal candy from Charlie while calling him a loser when he asking her an honest question. She also strikes up a rivalry with fellow brat Veruca Salt, although both attempt to hide it by pretending to be "best friends".

The Inventing Room and Transformation

Upon entering the inventing room Violet quickly shows an interest in the everlasting gobstoppers, believing them to be similar to gum. She is, however, quickly shot down by Wonka who points out that, unlike gum, Gobstoppers are not for chewing. Wonka then leads the group to a particularly large machine that, after much huffing and puffing, produces nothing but a simple stick much to the chagrin of the others. Violet takes the piece of gum as Wonka then explains that, unlike most other chewing gums, the one just created is actually a full three course dinner all by itself.

Violet then declares that the gum is "my kind of gum" and removes her own gum. Wonka then attempts to warn Violet about the gum's side effects, however Violet ignores him, declares that she is not afraid of anything, and begins to chew the fresh gum. At first the gum works like a charm, giving Violet the sensation of actually eating tomato soup and roast beef which deeply pleases her mother Scarlett Beauregarde, who gloats that her daughter will be the first person in the world to have a chewing gum meal and causes Veruca to stare in jealously. However things go slightly wrong when Violet hit's the dessert: blueberry pie and ice cream.

Veruca notices that something is happening to Violet's nose. All eyes turn to her as a bluish purplish stain starts to spread across her nose, much to her mother's shock. Violet was initially unable to see the change, and she touches her nose in confusion. However, once her mother starts panicking, both turn to Wonka for an explanation. He explains that the gum always goes wrong during the dessert, and that the blueberry pie was the culprit. He then ducks behind the machinery while the group backs away from Violet, whose hands and hair start to turn blue.

As Violet asks her mother what is happening to her, Violet's her body begins to gurgle and her stomach starts to swell up to the point that her belly bulges out of her clothes, turning her clothes purple as well. Violet's butt doubles in size, causing Violet to stare at it in shock. Grandpa Joe then notes that Violet is swelling up, and Charlie announces that it's like a blueberry as Violet's cheeks swell up, turning her pupils bright blue. Violet feels her body as it continues to expand at an extremely rapid rate, however eventually Violet's head, arms, and legs get sucked into the rest of her body, leaving her as nothing but gigantic blueberry. Violet is no longer able to move her body and can only rock back and forth.

Wonka then resurfaces and explains that the same thing has happened to the 20 Oompa Loompas he had tested it on, and that "it's just weird." Scarlett then protests that she cannot have a blueberry for a daughter, as Violet can no longer compete. Veruca the recommends that Violet be placed into a county fair much to Wonka's amusement. Scarlett contemplates this idea as music starts playing.

Oompa Loompas then emerge from the smoke of the Inventing Room and start to role Violet along, singing her titular song, mocking her over her chewing gum obsession, and jumping onto her and dancing. During the whole scene, Violet is shown groaning and screaming in fear at her fate, her voice noticeably more muffled and deeper than before, although she had calmed down by the end of the trip. The Oompa Loompas then roll Violet to the door, with Violet calling out Wonka's name. Wonka orders them to take her to the juicing room at once so that the juice can be squeezed out of her like a pimple, Hearing this Scarlett runs off to help Violet, who is stuck in the inventing room door and calling out for her mother. She is last seen being pushed out of the Inventing Room.

When Violet is last seen, she and her mother are leaving the factory. Violet had been completely juiced. However, she‘s no longer fully human, but a part-human, part-blueberry hybrid; as a result, she‘s thin, flexible and is still blue. As Scarlett walks along Violet cartwheels and back-flips after her, seemingly very pleased with her new abilities, even informing her mother that she is now much more flexible. However Scarlett coldly responds "Yes but you're still blue," implying that she‘ll give up coaching Violet and treat her like an actual daughter.

Scarlett Beauregarde - Scarlett is Violet's mother. However she behaves more like a coach than a mother, constantly telling Violet to win no matter what and giving her an unhealthily amount of praise. It’s implied in several scenes that she's living vicariously through her daughter and is only really interested in Violet winning. However she does show some motherly instinct when she rushes to help Violet out of the door and later has seemingly decided to stop coaching Violet, being more concerned with the fact her daughter is permanently blue.

Veruca Salt - Violet and Veruca hated each other from the moment they saw each other. However they tried to cover it by pretending to be best friends. Veruca is shown to be extremely pleased with Violet's transformation, as now her competition has been removed. She even suggests placing Violet in a county fair and later asks Wonka if Violet will always be a blueberry, hoping that her life will be ruined forever.

Charlie Bucket - While the rest of the kids (except for Mike to a lesser extent) treated Charlie poorly, Violet was noticeably the rudest to Charlie, even called him a loser when grabbing a candy apple. It‘s unknowing how she reacted when Charlie won the prize.

Willy Wonka - Violet is shown to have respect towards Wonka, even going as far as hugging him. However, this is most likely to give off a good reputation to Wonka, as she didn't listen to him when he told her to spit out the gum.

(1) Violet's cheeks expand during her inflation. Notice how despite being blue, her bottom lip is still red.

(2) Violet when her expansion is at the fastest. If one looks at her stomach in this scene, they can see that it's not completely blue.

(3) Violet during the tunnel scene. The blue light shining down on her foreshadows her fate.
Add a photo to this gallery

Violet's song is a 60's disco that talks about about how competitive she is, and how chewing gum is bad for you.

She goes on chewing till at last, her chewing muscles grow so fast,  And for her face a giant chin, sticks out just like a violin...

For years and years she chews away,  her jaws get stronger every day.  And with one great tremendous chew...  they bite the poor girl's tongue in two.  And that is why we try so hard, to save  Miss Violet Beauregarde.

For Violet as a blueberry, see Violet Beauregarde/Blueberry Gallery 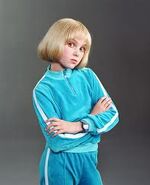 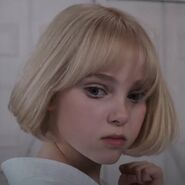 Violet doing karate, showing off one of her many skills.

Violet showing off her ticket.

Violet continuing to show off her ticket.

Violet blowing a bubble in the Chocolate Room. 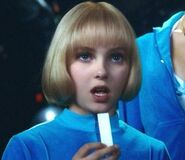 Violet and the gum.
Add a photo to this gallery
Retrieved from "https://charlieandthechocolatefactoryfilm.fandom.com/wiki/Violet_Beauregarde?oldid=8872"
Community content is available under CC-BY-SA unless otherwise noted.