Charlie and the Chocolate Factory Wiki
Register
Don't have an account?
Sign In
Advertisement
in: Hidden categories, Characters, Adult characters,
and 2 more

Willy Wonka is the owner of the Chocolate Factory, and he is portrayed by Johnny Depp

Wonka is the owner of the Chocolate Factory, and he is a tall, slender man, with brown hair, he usually wears a plum colored overcoat that went down to his knees over a black shirt with a W-shaped pin, a tall, black hat and golden chain (which seemed to be for a pocket watch).

Willy Wonka was born from his mother on an unknown date, he was forbidden to eat any candy, because his father, Wilbur Wonka is a dentist who hates candy, especially chocolate. So, Wonka left his home. But when he came back, his father was no longer there, and he was orphaned.

Wonka started his chocolate business after some time after, and he started a small shop on Cherry street. Grandpa Joe was hired as an employee to work for him. With Wonka's amazing candy, he soon became a billionaire, and with all that money, he built his own chocolate factory.

With the Ticket finders (And their parents), Wonka was a bit nervous, and he was unable to stop the children from disobeying his orders, causing Augustus Gloop to fall into the chocolate river, Violet Beaurgarde to turn into a gigantic blueberry, Veruca Salt to get tossed into the rubbish chute, and Mike Teevee to be shrunk into the size of a hand. But Charlie Bucket remained. However, Charlie preferred to stay with his parents, so he left. Willy Wonka was soon depressed, and as a result, his candy production started to go down.

Reuniting with his father

Wonka secretly met with Charlie while Charlie was shining his shoes. He asked Charlie about what made Charlie happy. Charlie replied that his parents made him happy. But Wonka disliked the idea of reuniting with his father, due to his childhood reasons. After some persuasion, he went with Charlie to his father's house. He made an appointment with the dentist, and Wilbur Wonka instantly recognized his son. 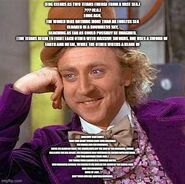 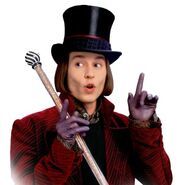